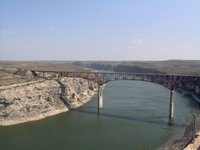 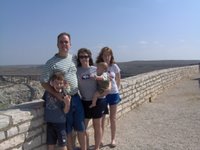 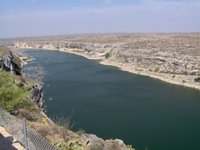 After a tearful good-bye, off we go to continue our Texas adventure 2006. Somewhere in West Texas is our destination, we have a couple of ideas, but the day is young. We had an exciting sight-seeing tour. Buckle up!

Deer leases are very common and popular in this part of . Hunting season is quite the money maker. Exotic game leases are also something that has become quite popular in our vast, bland scenery. In between Uvalde and Brackettville, our Tarheel girl squeals in amazement. On the road in front of us – you would expect a deer since this is big deer country, but instead it is an Alpaca or maybe it was a Llama! We pull over in hopes of getting picture, but it was not an easy target. We did, however, get to observe the sheriff deputy trying to “round it up”, BUT in his vehicle no less! My older brother -one of the few remaining "real" cowboys, in my opinion of course - would have been laughing!

It really makes you think of how the years have really changed the old fashion way of “rounding up”. No handsome cowboy wearing jeans, boots, a big belt buckle and a Stetson, Not on a horse, not on his feet, no rope in hand, no “whooha” yell – just a Dodge Ram with a Sheriff’s emblem on it driving and turning, driving and turning. Not the true Texas experience I would have like my kids to see! Oh well. Our adventure continues.

Once out of , almost unexpected, the river in its great canyon is seen. We pull over to the “overlook” and enjoy the peace and beauty of it. My brother, Jerry, tells us that somewhere along this river are caves and Indian petroglyphs, not to mention Texas size catfish. None could be seen or caught from where we were, but the kids seem to enjoy the diversion – out of the car, something different to see rather than the dry brushlands of the countyside. Pictures were taken like that of true tourist – but hey! That’s what we are! It's hard to believe that this huge river, not to mention Lake Amistad that we just passed, has all of this water, but with no benefit to the brush country. You can see miles and miles of Texas and it holds a beauty of its own - not found in a tree or different shades of green -no clastorphobia here - just Texas.

Everyone has heard of road-kill, especiallyl if you have any redneck blood in you! I think must have coined the term. As we continue on Highway 90 West, we see a huge deer plastered on the side of the road. The size of the deer was not what was so impressive – it was the enormous size of the buzzards eating at the carcous. These creatures are no where near the size of those seen in NC. Often when spending time on the river, if you saw buzzards circling in the sky, you knew some great dead thing was fixing to be dinner. I think they must circle trying to decide which part will be the first course, the main course and, of course, dessert! But how do they determine which one gets which part? A deer is a feast but what about the armadillos? Rattle snakes? Yuk! And then there are the Jackalopes!

If you’ve never been to beyond Del Rio, its miles and miles of nothingness! There are towns along the way, but very desolate and small. We stopped in , – wanting to venture into the “visitor station” and get some information on . The door is padlocked. Quite a statement from a small town. The hours of business are Monday – Friday 10am- 2pm. It’s five minutes till noon. Where is everyone? The Tarheel mouth proclaims that this is a “ghost town”. There are no people, yet there are businesses and cars about. One store for buying used tires has the front door open, so people must exist. Quite the contrary to the padlock - maybe safety was a factor depending on which side of the road you lived?We did find a short distance down the road, the happenin’ place. It was a convenient store for locals to get gas - $3.15, the highest noted on our trip so far, but also a place to get food from the grill area. The people are not openly friendly or loud like you would expect from a hang out, but they weren’t rude. We see a fellow tourist – licenses plate reported . I found nothing of a connection to engage in conversation , so we both continued our journeys. Them going on their way – ours going…I’m still not sure where.

15 hours later, just kidding, it was only 8, I think, we reach our destination- Alpine, Texas - Home of Sul Ross State University- where boys become Cowboys! Yee Ha! We can get out the van!