Old Woman who swallowed a fly 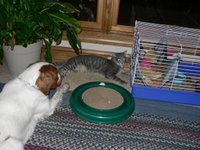 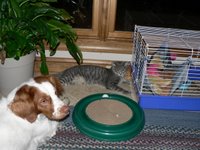 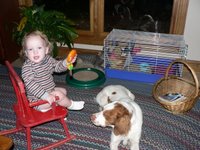 One of Tim’s favorite folk songs is “There was an old woman who swallowed a fly….” We often sing it on our long trips here and there. A silly song! Recently, our living room activities brought that song to mind except with a different version. “There was a sweet family who had a toddler who chased the dog who chased the ferret who chased the cat who wanted the fish – that wiggled and wiggled in the fish tank they had.” (or something like that!)

Posted by JoyfulRN at 5:38 PM No comments: 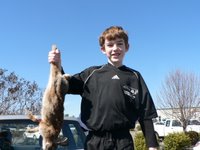 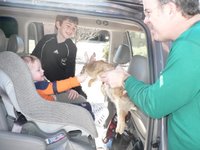 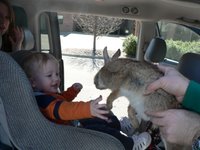 Tim has always enjoyed rabbit hunting, but work and family life has not always allowed time for him to indulge in such hobbies. Finally, the first time in a couple of years, he made time to do some male bonding with some of his buddies. Listening to yappy dogs, walking through bushes and briars and shooting a very loud gun does not appeal to me at all, but the thrill of the hunt must be enticing. Above are some pictures of Tim’s day of fun! Hunter seemed to be excited and thrilled and even little Walker already seems to think dead animals are fun! Yuk! (And for the record – cleaning, skinning, gutting, cooking and eating are not part of the deal when supporting my husband with his love of hunting!) Mama Beula will always be the winner of that prize!

Posted by JoyfulRN at 5:32 PM No comments: 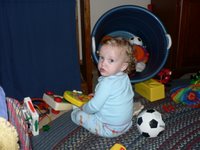 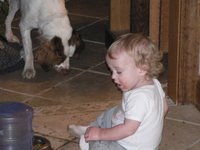 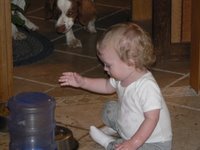 Just to keep you all up-to-date –Although Walker is growing and changing, learning new stuff all the time---his need to be mischievous has not changed. Above you can see him dragging his toys out and playing in the dog’s water and food bowl – grinning and smiling all the while! Thank goodness it is not on his list of great snacks to eat!

Posted by JoyfulRN at 5:15 PM No comments:

One of the wonderful attributes of my loving husband is he truly searches and searches and then searches some more to find the best deal and to always feel good about his purchase. Well, Tim decided - maybe it was Brittney that encouraged, No – it was Danielle that wanted a fuzzy hairball. It definitely was not Hunter. Walker didn’t even know what a kitty was. I’m not the animal lover of the crew, but for simplicity sake we’ll say “we” decided that a feline creature would be a nice addition to our list of pets – the dogs, the ferret and the fish. Tim and the kids researched it online. Traveled to the local animal shelters, visited PetSmart, looked in the classifieds, but without success. None seemed to have the pizzazz a Martin family cat required. A trip to Greensboro – to a PetSmart – and waoloa! The perfect cat was found – Roscoe P. Coaltrain! An application to adopt a pet was submitted, vet references were checked- oops! Angus, our Border Colliee, needed some up-to-date rabies shots – but otherwise we appeared on paper to be a family worthy of adopting a cat. $100 later, four phone calls and a visit to our home to ensure we were acceptable parents , he was delivered. Scratches, hisses and growls from him, a happy wagging tail from Pell –our Brittany,- squeals of delight from Walker and excitement from Danielle –would lead you to believe it was a perfect union. And then reality set in……..Stay tuned for the Roscoe/Martin family saga!

Posted by JoyfulRN at 6:39 PM No comments:

Visit with Nana Wee and Poppa 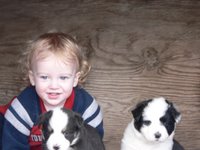 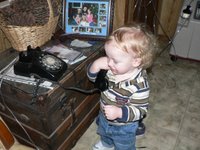 A wonderful, quick trip to Texas! A nice birthday party for my mom, a nice visit with my dad and Sallie. Walker seemed to enjoy figuring
things out with my dad. He enjoyed 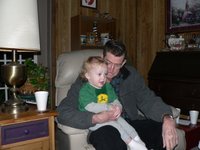 the puppies! He especi 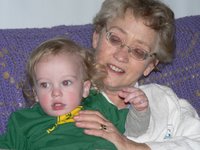 ally enjoyed talking on the antique phone. "What is this thing with the circle to put your finger in? Why does it go round and round? Dialing a number? But I’ve only known to push a button on a phone." Walker wonders. My parents are probably the only people I know that still use this antique novelty. And my brother is a phone guy!

Posted by JoyfulRN at 5:01 PM No comments: 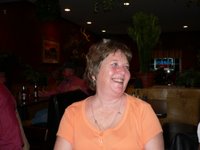 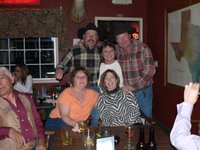 For my mom’s 59th birthday, we planned and re-planned and even got Lingo-my mom’s long time significant other – to be a little deceitful. For the first time in eight years, my two brothers –Jerry and Rusty – along with my sister – Debbie and I were together. Their family as well as my Aunt Carolyn and Uncle Harold met at Lunker Peabuckets for dinner. Lingo delivered on his part at precisely 6:50PM. They walked thru the door to a Happy Birthday song. There was a whole restaurant full of people who thankfully smiled as they saw tears in my moms eyes along with a look of surprise. We ate, we talked, we shared pictures of my mom over the last several years. We laughed, we told stories and eventually we even danced – a commonality and fun entertainment we all enjoy. The party was a success. Over 300 pictures were taken and boy! Do they tell their own story of the nights events. I think for all of us – it was night to remember!

A simple flight home -NOT!

Anticipating problems with the weather in NC, we left in plenty of time to get me and Walker to RDU. A quick weekend trip home (Thursday to Sunday)to see Daddy and Sally. Jerry and I had also arranged for my mom’s 59th surprise birthday party. Well……..American Airlines - I have to blame them since I can’t be angry at God or at Mother Nature – we arrived to DFW – Dallas, 45 minutes late. It seemed we had to fly around waiting to land. My connecting flight was not on the departure board. A long wait in the customer service line revealed that flight was canceled due to weather! Okay….placed on stand-by for the next flight out at 8:45PM. 8:45PM – All flights out of DFW cancelled due to weather! No snow, no rain – but I guess there was this thing called ice! And planes do not fly very well with ice on their wings. So…. “A reservation at a nearby hotel?”, she asks. Sure! An hour and a half later – searching for plain ole milk (not found very easily at food establishments in an airport!), waiting outside in the cold with a one year old (thank goodness he thought everything was fun!) only to discover the hotel they assigned us to was booked! So…next plan – I take the shuttle to the car rental place. Wait in line, rent a car and a carseat…guess what? The price tripled when we determined that although leaving from Dallas, but yet wanting to drop of the car in San Antonio. So…back down the stairs, back on the shuttle, back to the airport. I can’t get past the luggage pick-up due to Homeland security, so sleeping in the airport was not an option. It’s 11:00pm. I am using a cell phone that completely broke in half early that day, so for the phone calls I’m making with a baby on my hip, trying to hold the two pieces together and talk took a lot of coordination. My phone is ringing – my parents, my best friend who was supposed to pick me up in San Antonio. (Fortunately I caught her in route to the airport so an hour drive was not in vain!), my husband, my little brother…..one more thing I knew the tears would fall! And then….he must have sensed the desperation, the guy on the other end of the phone at a hotel –where I got the number, I can’t recall – but he said, “ we have one room left. The van will be by to pick you up.” 30 minutes later we load onto the van, arrive at the hotel, $130 less in my bank account – all to get 4 hours of sleep. Walker had long sense drifted off to sleep, but his 25 pounds (no stroller through all of this traveling through the airport either) had my arms quite weakened. Wake up call at 0530, to the airport by 0630, flight left on time at 0740, a rental car waiting (m y husband having pity on me as well), arrival to my dad’s at 1230PM – to the surprise party by 6PM. Whew! What a day! What a trooper Walker was! He was his usual happy-go-lucky, life is fun self! I have so much more empathy for people that fly and the weather shuts down airports. What chaos!

Posted by JoyfulRN at 3:45 PM No comments: 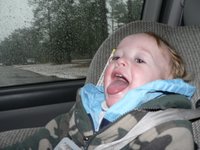 Siblings can always get credit for many things – some good, some questionable.

Brittney gets the applause, well, honors of teaching Walker to stick out his tongue.

It’s fascinating to see him growing and learning new things, but this? Hmmm? 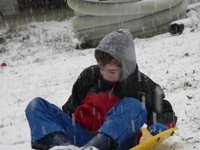 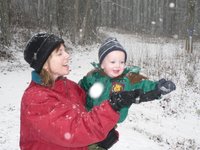 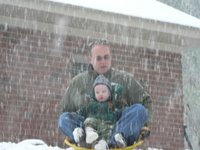 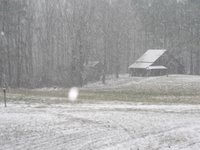 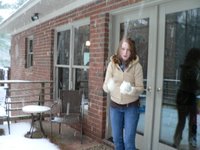 Our first snow of 2007. The white powder came falling – school cancelled!! Walker’s first time to play in the cold stuff. We had a few minutes of play, just enough to slide down the hill in the backyard. Weee! Even Danielle came out in the cold. Unfortunately, it was short lived though, only a couple of hours. It was the beginning, however, to a wild trip home to Texas. Thanks Mother Nature!

Posted by JoyfulRN at 9:23 AM No comments: