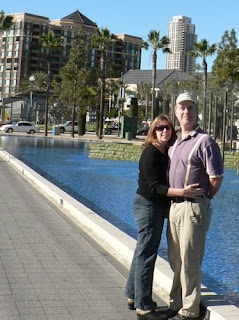 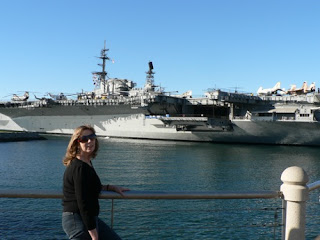 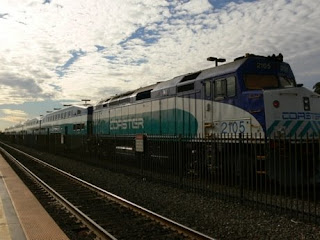 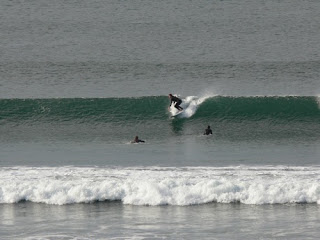 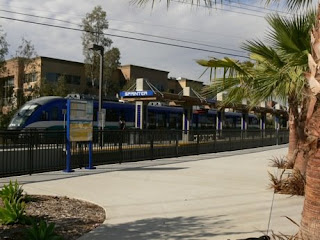 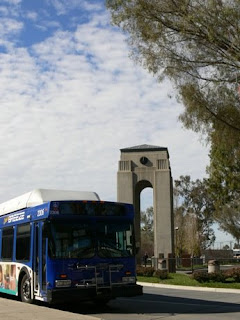 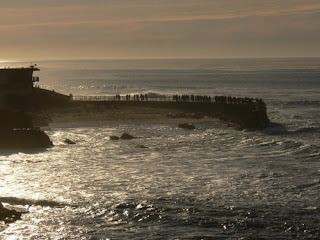 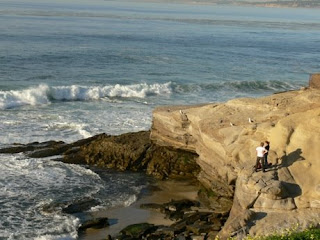 I am in Escondido, Ca this morning after having taken a "Public Transit" adventure. As anyone who knows me can vouch for, it does not take a lot to entertain me. Getting to see new places and seeing them for very cheap will do it.

I am on a trip to San Diego with Joy this week, and while she has had to go to class and slave away today, I have had the day to kill, so to speak. I have learned that San Diego not only has nearly perfect year round weather, but they also have a wonderfully diversified public transit system that not only covers the city, but the outlying county as well. So for $15, I bought a four day pass that allows me to ride any of the buses, trolleys or rails in the county for an unlimited amount of rides. Yesterday, Joy and I took the bus across the bay into Coronado. We found an internet cafe and Joy worked on her homework and I played on the internet. After she finished, I located a couple of geocaches to find before we left Coronado (which, by the way, was beautiful!). As luck would have it, on our way to the first geocache, we stumbled upon a lovely massage place, and Joy decided that sounded better than geocaching anytime. So while I was out hoofing it looking for a geocache, she was being rubbed down by Kim, or Chan, or Jackie or whatever. When I finally met her an hour and a half later, she looked completely relaxed.

So back to todays adventure. I got up early this am with plans to use every aspect of SD county's transportation system. I started out by taking the "Coaster", a train very similar to the Amtrak trains that were at the same station. They are like the English double decker buses with a top story! I rode the Coaster to Oceanside, expecting it to be fantastic with Ocean views and a nice ride. Wrong! For the most part, the coaster tracks followed gullies and went by junkyards. The train itself was nice and comfortable.

In Oceanside, after getting off the train, walking to the ocean (where I took the picture of the surfer) and back and generally killing a half hour, I boarded the "Sprinter" bound for the inland city of Escondido. The Sprinter was a smaller, lighter version of the Coaster. It was a single level and seemed to be lightly powered. But it did the job. It was comfortable, quick and best of all, free! (with my bus pass). I was quickly in Escondido, and unlike the Coaster, I saw some beautiful country along the way. The end station in Escondido was a transit center, so it had buses going in every direction. These were the "Breeze" buses that were seperate from the SD City buses. The drivers wore Magnum PI shirts and it was casual. Oh, it also was free.

After an hour at a nearby Barnes & Noble using their bathroom and internet, I set off on a Breeze bus for Solana Beach and ultimately, La Jolla. The Breeze took a single lane road through the center of the county and it was beautiful. The views were spectacular and everything was hilly, green and well kept. Very nice place to live. And like all of this area, very expensive. Gas is around $2.25 but sometimes seen for $2.49. Everything looks rich. Many import cars and everyone seems to have an accent or speak a different language. Lots of Europeans, Asians and of course, Latinos. This is a big research area, with Scripps Institute nearby.

Finally, after a couple of bus transfers, I landed in La Jolla (by the way, this is pronounced "La Hoya", so I sounded pretty country talking about going to "La Jolla". I got some stares!). La Jolla is a very, very high end community. It is built on an oceanside slope with beach clifts, spectacular views and huge waves. I spent an hour or two here, ate lunch (a $12 Belgium Endive Salad that would have fit in a cereal bowl) and went to a great coffee shop. I also walked to the beach and snapped the photos you see of the beach clifts and rocks.

Back on the bus and back to SD Old Town station, where to complete my day of public transportation, I boarded the SD trolley for the last leg home. You would have thought I was a bus inspector or something. I can say that it was very nice to have a public transit service that is so comprehensive and integrated. I can see how it would be useful to have a similar system in many other places. I would ride the Sprinter to work if it ran down Hwy 211 in Moore county. It would be great. Maybe one day, we will see the value of some type of shared transportation in all of our lives.

Another beautiful day here in SD! I understand it is snowing in Eagle Springs this morning. Going to soon be 75 and sunny here.

Till Later (I am going to the Museum of Man and the Museum of Natural History today in Balboa Park. I doubt I will make it to the world renowned SD Zoo. Just too much to do.)
Posted by Dealhound at 11:17 AM

Great post! I wish I could have enjoyed all the beautiful scenery with you! I should have talked to you about La Jolla beforehand! :-D

I wish you had been there as well. It would have been twice as nice shared!